I started working on this project about 3 years ago, writing explanations of the origins of the most commonly used Characters in Chinese. This is one of the most ambitious projects that I have ever started, and I’m proud to say that I recently reached my goal of creating explanations for the following:

You can browse all of this information on the Dong Chinese dictionary.

I’ve also made this data available in an open-source GitHub repository. You can download it, raise issues, and suggest improvements on my Chinese lexicon project there.

Dong Chinese shows an explanation of how characters are formed and breaks down their individual components. 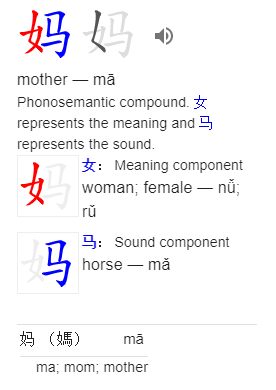 When relevant, it shows historical forms of characters to reveal their evolution. 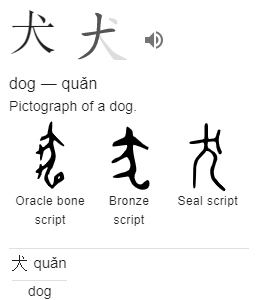 I’ve organized the components of characters into the following categories:

I’ve done my best to try to be as accurate as I can, but I’m sure there are errors in some of my explanations. I’ve learned a lot during the process of researching the origins of over a thousand characters, but I don’t claim to be an expert in the history of Chinese writing.

On top of that, many characters have an unclear history, and nobody really knows exactly how they came about. Sometimes I just chose an explanation that seemed plausible and made sense to me, and other times I just gave up on trying to figure it out and wrote “Origin unclear”.

Occasionally, I have decided to oversimplify the explanation and omit details that will not be helpful to people learning Chinese. Some characters have a long and convoluted history that would take pages to explain fully. Since my intended audience is people learning to read Chinese, rather than academics researching Chinese characters, a brief white lie can be preferable to the real explanation with lots of arcane details.

In any case, if you see a mistake or want to suggest an improvement, you can help out by opening an issue on my Chinese lexicon repository.

The most reliable and comprehensive source for character origins available online that I’ve found is the 漢語多功能字庫 Multi-function Chinese Character Database provided by The Chinese University of Hong Kong.

I’ve also found Wiktionary to often be useful, although the explanations there are often missing or inaccurate.

The 說文解字 Shuowen Jiezi is an ancient dictionary that is a remarkable work of scholarship for its time, and for thousands of years was treated as the bible for character origins, but in the last century, research into Oracle bone script has revealed that many of the explanations in the Shuowen are inaccurate.

The Chinese etymology website by Richard Sears is the best source I’ve found for finding images of historical forms of Chinese characters.