This sign is humorously reminiscient of Niel Armstrong’s famous words when he first stepped onto the surface of the moon in 1969, “One small step for man, one giant leap for mankind.” The literal meaning of this sign is almost identical to what Armstrong said, but used here in a rather indelicate context.

In proper Chinese style, the message is conveyed through over-the-top formal flowery poetic language. The first four words 温馨提示 compose a phrase often found at the beginning of signs that request the reader to behave in a certain manner. It’s rather similar to the phrase “gentle reminder” in English, but the adjective 温馨 is even more diplomatic than “gentle”, meaning “warm”, “soft and fragrant”, or “comforting”.

小草依依 请你爱惜
xiǎo cǎo yīyī qǐng nǐ àixī
The grass is small and delicate, we ask you please to cherish it.
(stay off the grass) 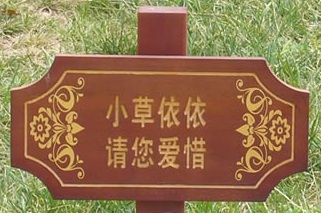 This is another example of the Chinese style of using flowery verbiage on signs, where the English equivalent would typically be short and direct (stay off the grass). In Chinese, four-character expressions are considered to be the most literarily pleasing, since most Chinese idioms (成语) are composed of four characters. This sign is a couplet of two four-character expressions, with the last syllables rhyming with each other.

There’s not a direct way to translate the word 依依 into English. This is a poetic word conveying the sound of leaves or blades of grass gently swaying back and forth as they rustle in the wind. 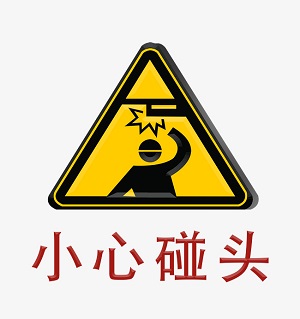 This sign is fairly direct, just like the English version, but there are two words in it that I found amusing when I saw it for the first time.

小心 literally means “little heart”, but as a whole it means “be careful”. This is a very common word to see at the beginning of signs warning of some danger.

碰 is onomatopoeia representing the sound when two object collide with each other, such as two cars crashing into each other, or on this sign, a head bumping onto something hanging from the ceiling. There’s nothing particularly unusual about this word, but for some reason I enjoy imagining the sound “pèng pèng pèng” as I watch people’s heads as they walk below this sign.