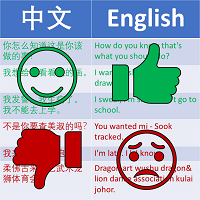 The main philosophy of Dong Chinese is that language should be learned through context, rather than memorizing individual words in isolation. This requires a large collection of complete sentences.

To that end, I collected millions of English-Chinese sentence pairs from a variety of corpora, including:

One of the biggest ongoing issues with Dong Chinese has been that many of these sentences pairs are not suitable due to any combination of these reasons:

Of course, it is not feasible to manually sort through millions of sentences to try to fix these problems. It would take a lifetime for me to complete such an enormous task by hand. For that reason, I had to try to find ways to automatically filter out the worst sentence pairs.

Since the beginning I have been developing a motley collection of different filtering algorithms that subjectively seemed to improve the accuracy, but until recently I had no good way of evaluating how effective they actually were. Last month I finally realized that I should have a better way of measuring the accuracy of my filters.

I took a sample of 5000 random sentence pairs from the different sources, and over the course of a few weeks I manually labelled them as “good-quality” or “bad-quality”. Once I had these labels, I could evaluate how much my algorithmic “low-quality” detection coincided my own subjective opinion of what was “low-quality”.

Before filtering, this was the percentage of “high-quality” sentences according to my subjective labelling of the random sample:

I also decided to throw out the sentences from UN documents. This was not due to the quality (I didn’t measure it), but because there were relatively few beginner-level sentences, and the more advanced sentences tended to be rather boring (e.g. “He asked who the members of the Procurement Task Force were.”).

I trained a simple neural network with one hidden layer to classify sentence quality on a spectrum between 0 (worst quality) and 1 (best quality) based on these 8 features:

This was a simple pattern-matching function to detect anomalies in punctuation and spacing. For example,

Filters out sentences with some common profanities in English and Chinese. The reason for this was not primarily, as one might expect, to only show G-rated sentences on Dong Chinese (I cannot guarantee that), but because translations with profanity had a tendency to be loose or inaccurate.

Many sentence pairs were grammatically correct and matched each other, but contained jargon that many people wouldn’t know. (e.g. “The broth of Cordyceps militaris fermentation contained antimicrobial active substances”) This issue was especially prevalent in the Education and Science corpora. Sentences with a high Flesch-Kincaid readability score were more likely to be too difficult to read.

I used the Hanzi Tools part-of-speech tagging tool to detect transliterated names in Chinese, and the wink-pos-tagger to do the same detection in English.

Using the same part-of-speech tagging mentioned above, I filtered out sentences that didn’t have any verbs, since they tended to be incomplete sentence fragments.

I used the LanguageTool API to detect grammar and spelling mistakes in the English sentences. I also tried the grammar checker for Mandarin, but it wasn’t nearly as useful as the English one and did not offer any improvement over the baseline accuracy.

To calculate the similarity between the Chinese and English sentence, I followed this process:

This still allows overly literal word-for-word translations to slip through the cracks, and eliminates some good translations, but in general this was the most powerful filtering technique I had.

There is now a multilingual sentence encoder that came out in July 2019. This might allow skipping the machine translation step, but I have not evaluated it yet, since I wrote my sentence similarity script before this model was released.

I ran the classifier network on the sentences in the testing sample, and rejected sentences that it graded below 0.8. It rejected about four out of five sentences. This was the percentage of “high-quality” sentences in the remainder according to my manual labels:

It’s a big improvement. I’m proud of it, but I still can’t say that the problem is “solved”. There is still a lot of potential for improvement, and I’m always open to hearing suggestions. As always, if you see a low-quality sentence on Dong Chinese, you can report it with the feedback button.