The characters 來 (lái; come) and 麥 (mài; wheat) have a rather unusual story behind them.

來 was originally a pictograph of a stalk of wheat. 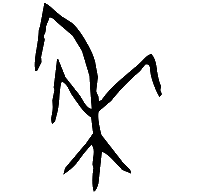 麥 is the same thing but with the 夊 (foot; walking) component at the bottom.

It seems like these characters should be the opposite of what they are: “wheat” should be a picture of wheat (來), and “come” should have the walking component (夊). At some point in history this may have been the case, but since “come” is a much more common word, it was preferable to represent it with the simpler character, and represent the less common “wheat” with the more complex character.